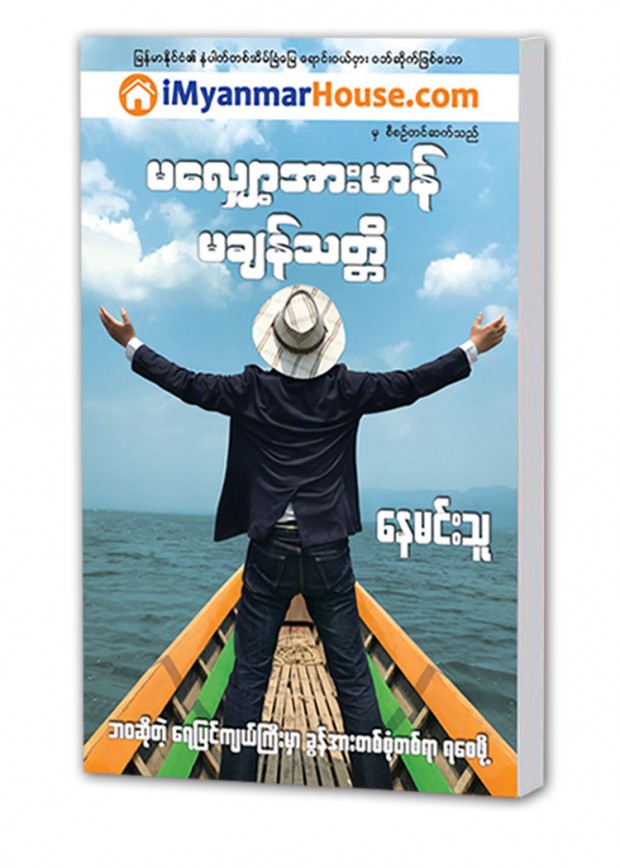 Never Give Up, Never Back Down - Nay Min Thu (MD, iMyanmarHouse.com)

This is the autobiography of Ko Nay Min Thu who started from the bottom and became a self-made millionaire at age 30 and is the founder and managing director of iMyanmarHouse.com, the leading property website in Myanmar’s real estate industry in a short period of time.

He also used to talk under the title “How to Become a Millionaire by Age 30” in his talks.

In this book, his life story including his naughty childhood, how he was eager to tease in youth, how he helped his father in his watch shop, how he learned English, how he tried to improve his speaking skill though he was shy, how he attended trainings in Yangon after he passed matriculation exam, how he attended school in Singapore, how he took up any job that came by, how he sold some of his blood as he was completely broke, how he could not eat regularly, how he showered in toilet, how his businesses became successful after he knew the secrets to success in life, how he became a self-made millionaire at age 30 and four tips to follow by youths to be successful in life has been written.

It was half past ten in a July morning 30 years ago. It was in labour ward of general hospital in Pyay, a city in central Myanmar. Doctors, nurses and guardians of patients were moving to and fro inside the hospital.

A 45 years old pregnant woman was lying on a bed in the labour ward.

As she was old enough, she had to have a Caesarean according to the doctors’ decision. At that time, caesarean was carried out only in the situation that a pregnant woman cannot normally deliver as medical infrastructure and technology of the country were under development. In some Caesarean cases, there was death of baby or both of baby & mommy. It was still in the age that the proverb “Childbirth of a woman is very dangerous as like as rafting of a man” was true.

“Who is the guardian of the patient? Please, sign in this operation agreement paper.” a nurse asked standing beside the lower part of the bed.

His Life Story In Brief Said By Himself

I was born and grew up in Pyay. Our family is not rich. I have five siblings. My father worked at his own watch sale & service shop. All of our siblings helped him in his shop since childhood.

I got the opportunity to attend school in Singapore after passed matriculation exam. In my early days in Singapore, I had to overcome many difficulties. I could not say in English well. I attended school there and also worked many part-time jobs. I took up any job that came by including kitchen helper, dish washer, waiter and seller. In a day, I was completely broke. So, I sold some of my blood for $ 30 in a pharmaceutical research company. (The company call the personal blood selling to them blood donating. They gave the donator $ 30 as travel cost. But I supposed the action as selling not donating because I gave my blood for money.) The difficulties pushed me toward success in life.

After the school in 2008, I started ‘ZillionTech.com’ website design business, my first business, in a small 7’x10’ office near Bugis with a thousand dollar of all my savings. I decided to just stay in the office to save travel time and money. I had to request owner of the room to agree it. At the nights, I laid sackcloth on the floor beside the office table and slept on it. There were only the small table and a chair in the office.

There was not bathroom in the office. So I had to shower in the toilet. There was still insignificant amount of my business’s revenue a year later. In 2009, zero often appeared my bank balance. I could not pay office rents. I had to have instant noodles for a month. It is my ugly life in the first year in business.

In September 2009, my life greatly changed and I knew how to try to be successful in life. Monthly profit of my technology based business became above thirty thousand dollars within the next year. And two years later, I could purchase a condominium valued over one million dollars (MMK 1,000,000,000).

I have five businesses in Myanmar and Singapore now. I run iMyanmarHouse.com using most of my time under managing director position with over a hundred of employees.

I said those not because I want to boast. But because I want to say that a man who knows the secret to be successful and do as he knows can try to completely change his life in a year. It only took three years for me to be a millionaire. It is much easier to make another million dollars.

You can also get rich by doing an ethical and lawful business if you make an effort.

Nobody can take his assets away with him except his beneficence when he dies. I am not saying to trust me. I am not forcibly selling anything. It is worthy that just a few hundred among a thousand people have benefited little or greatly from my saying out.

My life story and how I tried to become a millionaire have been written in this book.

May you be pleased!

Chapter (2) The Bumpkin Arrived In Yangon
Ooh! There Are Many People
First Failure in Life Exam
The Two Bumpkins
How I Learned English
I must get rich one day
Me Who Was Also A Student Guide
The Admirable Elder Sister As Like As Mother

Chapter (3) This Is Singapore!
Arrived In The Lion City
Fresher Welcome Day
First Friend In Singapore
Singapore Education System
Met With English Again
Speaking Skill
The Waiter Me
The Jobs I Took
Invested In Stocks And Made A Loss
In The Midst Of Seven Kings
Became A Bank Employee After School
Bye-Bye Bank Jobs
Missed Scholarship
Back To School Again
Launch of Website Design Business
Most Effective Market Penetration
Carried On The Own Business
Suffering I Faced
Never Give Up, Never Back Down

Chapter (7) Physical Strength & Mental Power
Power And Strength For Life
Physical Strength
Drug Not To Be Old
Gambling
Even A Country May Be In Disorder Because Of Unwise First Lady
Morality
Importance Of Morality
Over Three Thousand Thoughts
Thinking Way of Two Youths
Nourish Your Mind If You Are Depressed
Way To Improve Mind Power
Blaming And Regret
Praise
Refrain From Blaming And Criticizing
Refraining From Blaming For Thirty Days
Refrain From Giving Excuses
Refrain From Complaining
Always Think Higher Even Live In Lower
Autosuggestion And Dr. Sai Sam Tun
Some Of Autosuggestion Quotes